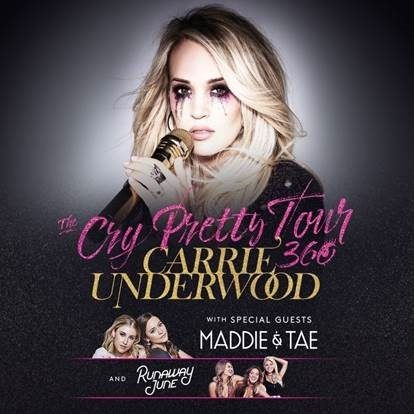 New Show Will Be Performed In The Round

Nashville, TN – (August 8, 2018) – Seven-time Grammy winner and Pollstar’s three-time top female country touring artist, Carrie Underwood, will launch a new arena tour, The Cry Pretty Tour 360, in Spring 2019.  Sponsored by CALIA, the new tour will kick off on May 1 in Greensboro, NC, and will play 55 arenas across the U.S. and Canada and be promoted by AEG Presents.  She will be joined on tour by special guests Maddie & Tae and Runaway June.  Underwood made the announcement this morning in a personal video to her fans:

Tickets for the concerts go on sale to the general public beginning Friday, August 17th at 10am local time but please check local listings. For more information including the Cry Pretty album/ticket bundle, go to http://www.carrieunderwoodofficial.com. Also beginning Monday, August 13th, a limited number of exclusive VIP Packages will be available which include an amazing selection of tickets, Meet & Greets, autographed memorabilia, custom merchandise and much more.

Citi® is the official presale credit card for Carrie Underwood’s “The Cry Pretty Tour 360” for 2019. As such, Citi® cardmembers will have access to purchase presale tickets beginning on Monday, August 13 at 12pm until Thursday, August 16 at 10pm through Citi’s Private Pass® program. For complete presale details, visit www.citiprivatepass.com.

Underwood will release her eagerly-anticipated new album, Cry Pretty, on September 14. Cry Pretty will be her first studio album on Capitol Records Nashville and marks the first time she has co-produced her own album. The lead single and title track, “Cry Pretty” debuted as the #1 song in the U.S. all-genres. The song also topped download charts in 38 countries around the world and amassed over 3.5 billion social impressions across 66 countries during its week of launch in April, which was culminated with a show-stopping performance on the “2018 ACM Awards” telecast. Carrie co-wrote the powerful single with Hillary Lindsey, Lori McKenna, and Liz Rose (aka The Love Junkies) and co-produced Cry Pretty with fellow writer/producer David Garcia.

Following her successful “The Storyteller Tour – Stories in the Round,” the new production will feature a brand-new stage in the middle of the arena floor, creating a unique 360-degree setting to allow fans on all sides of the arena an intimate view of the concert.  Barry Lather (Rihanna, Mariah Carey, Michael Jackson) is the tour’s Creative Director, and Nick Whitehouse/Fireplay (Justin Timberlake, Beyonce) is Production Designer.

“I love performing in the round,” says Underwood.  “It’s so much fun for me and the band to play in every direction and creates a much more intimate and immersive experience for the audience, even in a larger arena setting.  It’s been exciting to introduce audiences to Cry Pretty and I can’t wait to bring the new album to life on this tour, along with all of the songs we love to play live.  I’m thrilled to be going out with an amazing line-up – Maddie & Tae and Runaway June are incredible artists that are going to bring even more electricity to our shows.”

“Our customers love getting early access to the best in entertainment, so we are thrilled to be partnering with Carrie Underwood as the official presale credit card of her 2019 tour,” said Jennifer Breithaupt, Global Consumer Chief Marketing Officer, Citi.

Underwood has arranged for a donation of $1 from each ticket sold for The Cry Pretty Tour 360 to be contributed to Danita’s Children, which provides a safe haven for abandoned and vulnerable children in Haiti, while encouraging families to stay together through their education and malnutrition programs.

Prior to embarking on the tour next Spring, Underwood will appear at the upcoming iHeart Music Festival in Las Vegas, as well as such international festivals as The Long Road Festival and Radio 2 Live in Hyde Park in the UK, Tuckerville in The Netherlands, and Deni Ute Muster in Australia.

Carrie was recognized by Pollstar as the top female country touring artist for each of her headlining tours in 2008, 2010, 2012 and for 2016’s “The Storyteller Tour – Stories in the Round.”  Her earlier “Blown Away Tour” played 112 shows in 110 cities across three continents and six countries, including sold-out shows at London’s prestigious Royal Albert Hall, and two nights at the Sydney Opera House in Sydney, Australia. She topped Billboard’s Top 25 Tours of 2016 as the leading female country artist and was the leading female artist on Country Aircheck’s top country radio performers list for her success in both 2015 and 2016. Her five studio albums, Some Hearts, Carnival Ride, Play On, Blown Away and Storyteller – are certified Platinum or multi-Platinum, each winning an American Music Award  as Favorite Country Album and tallying an incredible 40 weeks at #1 on Billboard’s Top Country Albums chart.  Carrie is the first female artist to be twice named the Academy of Country Music’s Entertainer of the Year.  In addition to seven GRAMMY® awards, she has won six CMA Awards, 17 CMT Music Awards, 12 American Music Awards and numerous other awards and honors.  She recently took home her 14th career ACM Award for Vocal Event of the Year for “The Fighter,” her collaboration with Keith Urban.

About CARRIE UNDERWOOD: Carrie Underwood emerged from the promise of her 2005 American Idol win to become a true multi-format, multi-media superstar, spanning achievements in music, television, and film. A seven-time GRAMMY® Award winner, she has sold 64 million records worldwide and recorded 26 #1 singles, 13 of which she co-wrote.  She will release Cry Pretty, her first studio album on Capitol Records Nashville on September 14, marking the first time she has co-produced her own album.  The title track and lead single was released worldwide on April 11. Co-produced and co-written by Carrie, it has already topped the iTunes Top Songs charts in 12 countries.  The music video, directed by Randee St. Nicholas, premiered May 6.  Earlier this year, she released the hit event anthem she co-wrote, “The Champion” featuring Ludacris, which opened NBC’s Super Bowl LII and was incorporated into the network’s coverage of the 2018 Olympic Winter Games.  In 2013, Carrie starred as Maria von Trapp in NBC’s three-hour holiday blockbuster, the Emmy®-winning The Sound of Music Live!, whose airings attracted 44 million viewers.  She is lead designer for her fitness and lifestyle brand, CALIA by Carrie Underwood, which launched in 2015 and is exclusively available at DICK’S Sporting Goods nationwide and online at www.caliastudio.com.  This year, Carrie celebrated her 10th anniversary as a proud member of the Grand Ole Opry and will return this Fall for her sixth season as the voice of primetime television’s #1 program, Sunday Night Football.  In November, Underwood and Brad Paisley will co-host the CMA Awards for the 11th consecutive year.

About MADDIE & TAE:  Award-winning duo Maddie & Tae recently released their brand new single, “Friends Don’t,” “anchored around their stellar vocal pairings and some of the tightest harmonies on Music Row (Rolling Stone). Co-written by the pair, “Friends Don’t” is the lead track from their forthcoming sophomore album, which will be released on Mercury Nashville. Maddie & Tae first broke out in 2013 with their brilliant take down of bro-country, “Girl In A Country Song,” which took Country radio by storm, skyrocketing to the top of the charts and quickly going PLATINUM. The Platinum-selling duo became only the third female duo in 70 years to top the country airplay charts, also earning trophies from the Country Music Academy and Radio Disney Music Awards along with multiple ACM, CMA and CMT Award nominations. Receiving widespread praise from NPR, Billboard, Entertainment Weekly, The Washington Post, Glamour and others, country music’s hottest stars including Dierks Bentley, Lee Brice and Brad Paisley have welcomed Maddie & Tae on the road. For additional information, please visit www.maddieandtae.com.

About RUNAWAY JUNE:  Lauded by Billboard as the “Next Hot Trend in Country Music” and likened to a ‘Dixie Chicks for a new generation,’ Runaway June’s organic three-part harmonies and ringing strings are sweeping the nation, leaving a mark on one infatuated audience after another with its “inescapable talent” (AXS.com). The BBR Music Group/Wheelhouse Records act is comprised of the vocal stylings and musicianship of Naomi Cooke (lead vocals, guitar); Hannah Mulholland (vocals; mandolin); and Jennifer Wayne (vocals; guitar).  The trio is receiving rave critical notices from the likes of Billboard, Rolling Stone Country, The Huffington Post, CMT and more for its brand of organic and melodic Country music. Runaway June is the first all-female trio in over a DECADE to earn two Top 40 hits and recently scored a 2018 ACM nomination for New Vocal Duo or Group of The Year. They are finalizing their debut project for Wheelhouse Records, due out later this year. For more information, visit: www.RunawayJune.com

About DANITA’S CHILDREN:  Danita’s Children/Hope for Haiti Children’s Center is a TN-based 501c3 organization whose mission is to rescue, love, and care for orphaned and impoverished children in Haiti.  It was founded in 1999 by Danita Estrella Watts who, after stopping the merciless beating of a hungry street child, saw the need and took action.  Today, nearly 20 years later, what began as one small home has blossomed into a Pre-K to 12 School, Pediatric Medical Center, Malnutrition Clinic, family-style homes for orphaned children, Church, and Feeding Program that has served thousands of people throughout the northern region of Haiti and beyond.  From education to medical care, disaster relief to spiritual revitalization, Danita’s Children is bringing compassion, dignity, and hope to the children of rural Haiti, and empowering the building of strong families. With the belief that every single child is a precious gift, Danita’s Children works every day to carry out its vision of transforming Haiti… one child at a time.